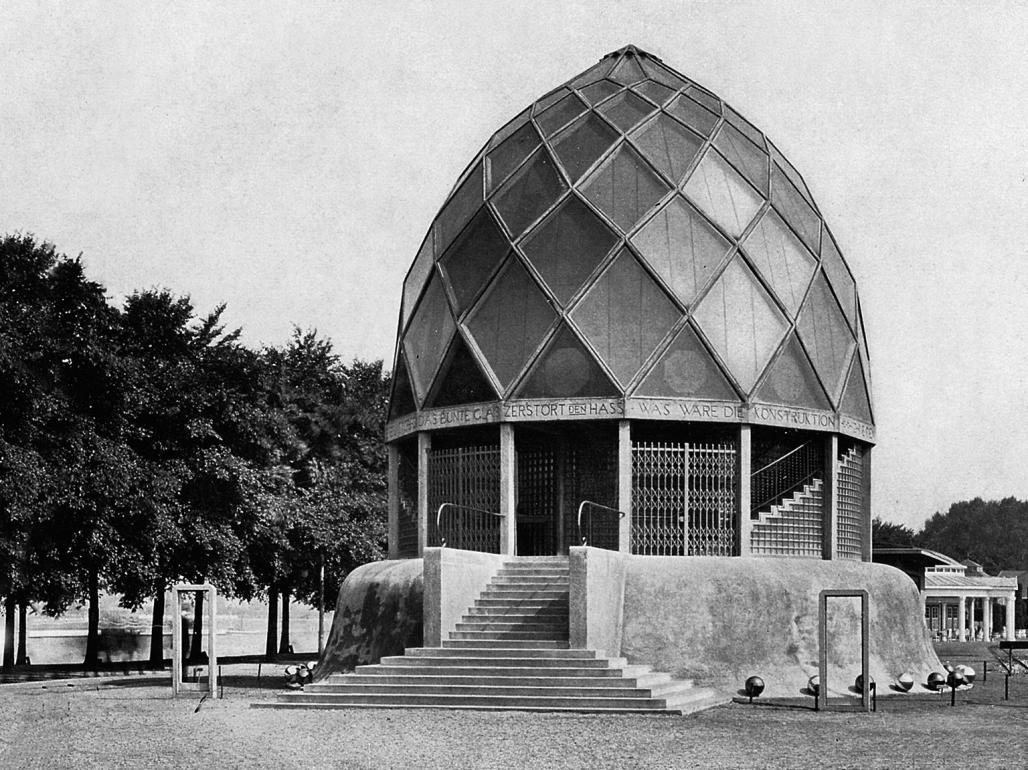 1914 book Glasarchitektur [Glass architecture] remains, from all the visionary writings of the early 20th Century, one of the most remarkable and influential in shaping the future’s environment. Its author, German novelist and poet Paul Scheerbart (1863-1915), whose work ranges from fantastic literature to scientific illustrations, had the remarkable ability to render visible what he described.

Writing against Old Europe’s enclosed world of brick and masonry, he set the vision of a future of a light, crystal clear, colourful architecture made of glass, steel and light: “introducing Glass Architecture which will let the sunlight and the light of the moon and the stars shine into the room, not through a couple of windows but, as nearly as possible through whole walls, of coloured glass. The new milieu so created will bring us a new culture.”

However, unlike other contemporary visionaries, Scheerbart demonstrates a keen understanding of where technology could be used to shape the environment, from double-glazing to radiant floors:

“Since air is one of the worst conductors of heat, all glass architecture needs this double wall. (…) Convectors and radiant heaters should not be put between the two skins because too much of their output will be lost to the outside air. Obviously, glass buildings are only suitable for building around the temperate zones (…) And for warmth, one could grace the floor with electrically heated carpets.”

His complete and detailed view of the future of glass anticipated new materials to replace wood for glazing bars and new claddings for concrete.

New furniture of steel would be placed in the centre of the rooms liberating the glass walls — foreseeing the disappearance of the word Fenster as the wall becomes fully glazed —, while the building would be seen externally as a light modelled in forms.

These visions came true in ways that could not be anticipated and, despite modern architects’ passion for glass, Scheerbart’s vision provides a different take, alternative to concrete and whitewashed surfaces. Also, while almost everybody was aiming for greater levels of illumination, Scheerbart was aware that “an increase in the intensity of light is not what we need. It is already much too strong, and can no longer be tolerated by our eyes. Tempered light is what we need. Not ‘More light!’ but ‘More coloured light!’ must be the call.”

His direct influence on expressionist architecture can be seen in the work of Bruno Taut, to whom Glasarchitektur was dedicated. Taut’s glass pavilion at the Wekbund exhibition in Cologne was dedicated to Scheerbart in return, whom Taut considered the ‘only poet in architecture’. Their association was however short-lived, as Scheerbart passed away in 1915, two years after their encounter.
Click to read the complete essay
Share Tweet Share Pin